What does Saturday night worship look like at North Ryde UCA?

“In the trees, on the tables, in jars, it’s phenomenal,” says Rev. James Aaron, who was inducted as minister at North Ryde just over six months ago.

Tash and James are part of the night worship team, which at the moment includes six people, who help with running the new Saturday night worship space, from leading worship to running the multimedia.  With the additional help from the morning service hospitality team, helping serve coffee and pastries it all comes together (and did we mention with fairy lights!).

One of the team members is a Period of Discernment candidate who is using this new night worship model as part of his learning.

“So we’ve started already incorporating that next phase of leadership,” explains James.

The night service is a similar structure to the morning service but different in that singing the prayers is a staple.

“You don’t have to throw everything out, there is good stuff in traditional and liturgical,” says Tash, who is also the Hunter Presbytery Church Engagement Leader at Uniting.

“I think the difference is, with what we’re doing, is that we definitely want to bring that modern edge. So the way it looks, the way it sounds, the way it feels, has to be hitting the mark.”

Tash goes on to say it’s about making every component be “fully alive”.

“We can do a hymn. But it’s going to be passionate and it’s going to be fully alive, through the teaching, the music, and the bible reading…we don’t limit ourselves and say, ‘Oh we can’t do that because it’s a morning service thing,’” says Tash.

With a mix of young and old, morning service members and new members, James says the emergence of this new night service has been supported by the North Ryde congregation from the beginning.

“All of the elders in the community have supported this by either coming or meeting with the team, and the church council is supporting it fully.

“One of the elders from the main congregation said, ‘I want to steward this into being an action, can I give out communion, can I help with this and that,’” says James. 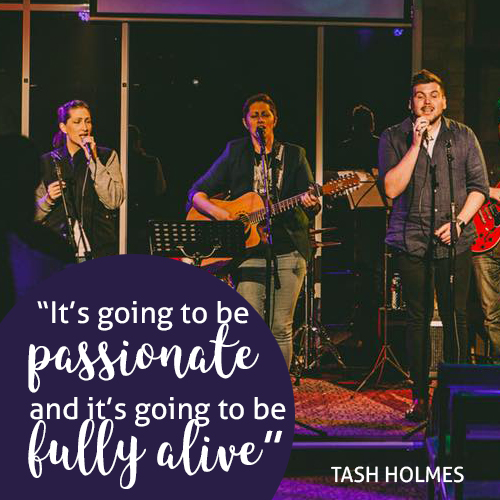 Word is getting out about the service and with two successful Saturday nights already done, there seems to be an appetite and need for this type of worship in the Uniting Church (at least at North Ryde). As Tash explains that after the first service parents, who had brought along their kids, came up to them expressing how happy they were that this was happening at the North Ryde church.

“They said, ‘There is hope for our kids to remain connected to the church.’ Just from that one worship experience, this is what has been missing…that is really moving,” says Tash.

With more young people asking to get involved in the night service, Tash says that with this emerging community there is a wealth of untapped skills and talents that could help continue to grow this faith community. Both Tash and James, agree that it can be difficult to find a place where great theology is matched with great worship and this is where North Ryde is trying to make the two work together.

“The great theology of the Uniting Church has around affirming, welcoming and being open and inclusive, and all of those great buzz words.

Building the church of tomorrow

Diversifying our worship spaces and putting resources towards building the church of tomorrow. What does that mean for the Uniting Church? That’s the question James poses.

“There is a good question in there about how do we actually create a space where people are not visiting a museum but actually visiting their faith, and fellowship and community and therefore their church,” says James.

North Ryde, as James explains, are actively talking about what the future holds and how they can serve the community.

Connecting with the spiritually homeless

In recent times there has been an increase in people who identify as ‘spiritual but not religious.’ So how do we connect with the spiritually homeless, in a society that is distracted and constantly on the move?

“I think people are genuinely looking for depth, authenticity and inclusivity and they are not often finding that in the mainstream churches,” says Tash.“We need to pay attention & create spaces to inspire the community to come alive, so when they come through the doors, they are embraced with the living church.”

“We’re always looking for the next app to connect us to the person next to us for different reasons.”

Breaking through that and reaching people in a meaningful way is difficult but not impossible.

“Gone is the expectation that people will just go to their church on Sunday. So we actually have to meet people where they’re at, which is not all that shocking if you look at the story of Jesus,” says James.

There is a need for that online and social presence, that’s usually the first contact, but it’s important to follow that through with how we think about worship when people do come through the doors.

“No one would go to a restaurant that had bad customer service, that had a terrible atmosphere, horrible food, you just wouldn’t go back,” says Tash.

“What kind of experience are we offering people when we open our doors…..because trust me it matters!” 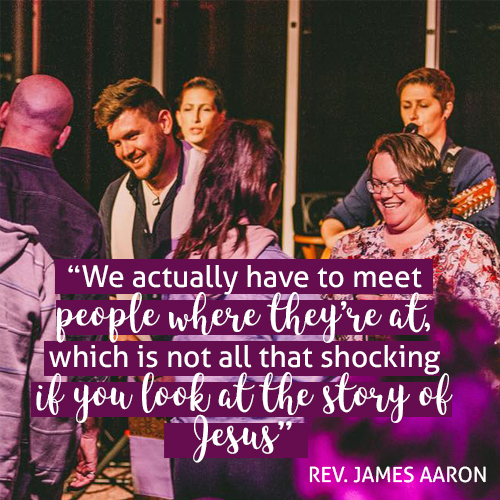 As for James, it’s also going further and supporting local chaplains and local care services like Uniting and putting that faith into action.

This means stepping out of working in silo and not being just focussed on just protecting our “patch”. James says that rather than asking will this new person change us instead ask, “How do I serve that person? If that means setting down the red book for one song a week then maybe it is time.”

“What does it mean for me to work with the team, of ministers and lay people and all of that and pull them together?

“It’s not my patch it’s ours and I think we need to continue to sew that together,” says James.

As the Synod commits itself to identifying new expressions of worship and what it means to be the church in the 21st Century, this amazing new initiative seems to be just the start. Watch this space.

You can catch the next North Ryde night service on June 2nd at 6pm.

This article was first published in Insights Magazine.